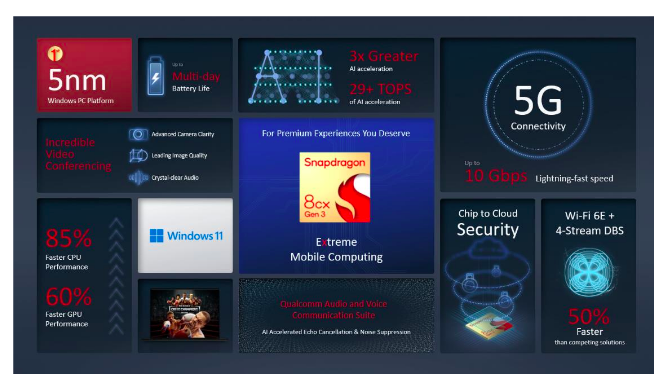 The latest platform is focused on bolstering the productivity value of Arm-based PCs.

The Qualcomm FastConnect 6900 is also included for Wi-Fi 6E speeds of up to 3.6 Gbps.

The Snapdragon 8cx Gen 3 is a 5nm Windows PC platform, and with the inclusion of this design, Qualcomm says this has created the room required to improve the performance of the Kryo CPU without dramatically increasing power consumption in comparison to the 8cx Gen 2.

According to the company, there is up to an 85% Kryo CPU generational performance uplift and up to 60% greater performance in the Adreno GPU.

The Snapdragon 8cx Gen 3 also supports up to HDR 4K video playback (up to 120fps) and the Qualcomm Spectra ISP has been revised to improve camera start-up times by up to 15%. HDR 4K image capture is possible and there is support for up to four concurrent cameras.

Enhancing productivity tools, such as videoconferencing applications, appears to be key in this platform update. Qualcomm has included “3A” — Auto focus, Auto White Balance, and Auto Exposure — features to improve the quality of video calls, such as those made via Microsoft Teams and Zoom.

In addition, the Snapdragon 8cx Gen 3 comes with Qualcomm noise cancelation technology, another potential boost for staff calls when many of us are now either working from home or have adopted hybrid setups.

Artificial intelligence (AI) functions have been improved with an acceleration rate of more than 29 TOPS.

On Wednesday, Miguel Nunes, VP of Product Management at Qualcomm told attendees of the Qualcomm Snapdragon Tech Summit that “most of us have spent more time on a PC than we would have imagined over the past 24 months,” and, therefore, “the PC has become important again.”

This concept extends to the entry-level tier and ties to the launch of the Snapdragon 7c+ Gen 3, designed for this category of Windows and Chromebook devices.

The 6nm Snapdragon 7c+ Gen 3 comes with a Kryo CPU and Adreno CPU, revised hardware that Qualcomm says has resulted in a CPU performance increase of up to 60% based on past iterations, as well as an uplift of up to 70% in graphics. The platform also comes with an integrated Snapdragon X53 5G Modem-RF, the Qualcomm AI Engine (6.5 TOPS), and FastConnect 6700 for Wi-Fi 6/6E speeds of up to 2.9 Gbps.

In addition, the Spectra ISP makes an appearance with support for triple cameras and 4K HDR video capture.

Nunes said that the Snapdragon 7c+ Gen 3 “raises the bar” for entry-level devices in today’s computing ecosystems and the company is focused on bringing “top to bottom” features to this category.

Snapdragon 8cx Gen 3 and Snapdragon 7c+ Gen 3 devices are expected be made available early next year.

In addition to these announcements, Qualcomm also unveiled the Snapdragon G3x Gen 1, a new gaming platform for the Android operating system. Qualcomm is partnering with gaming hardware developer Razer, a collaboration that has resulted in the creation of a handheld gaming developer kit for Snapdragon G3x.