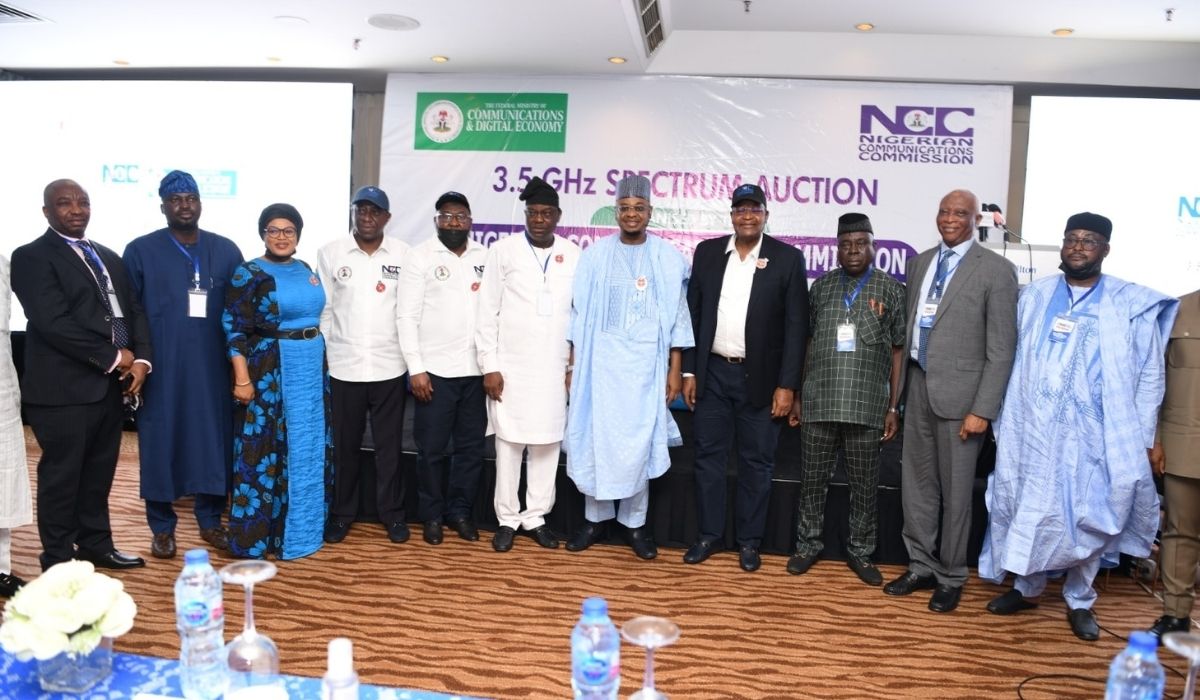 MTN and Mafab Win the 5G Spectrum Auction in Nigeria

MTN and Mafab Win the 5G Spectrum Auction in Nigeria

MTN and Mafab Communications have announced that they have emerged as the winners of the 3.5 GHz spectrum auction for 5G deployment.

After 11 rounds of bidding that lasted eight hours, Mafab Communications Ltd and MTN Nigeria Plc, have emerged the two successful winners of the 3.5 gigahertz (GHz) spectrum auction for the deployment of Fifth Generation (5G) technology to support the delivery of ubiquitous broadband services in Nigeria.

The two winners emerged in a keenly contested 3.5GHz Spectrum auction conducted by the Nigerian Communications Commission (NCC), in collaboration with the Federal Ministry of Communications and Digital Economy. The event took place at the Transcorp Hilton Hotel, Abuja on Monday, December 13, 2021.

Three companies, namely MTN, Airtel and Mafab Communications Limited, had qualified for the auction, having met the requirements stipulated in the Information Memorandum (IM) for the spectrum auction. The three companies had also participated in a mock auction held on Friday, December 10, 2021, which served as a precursor to the Main Auction conducted on Monday, December 13, 2021.

In an exercise that clearly demonstrated demand outstripping supply, with Ascending Clock Auction System adopted by the Commission, the three bidders participated in the intensely competitive auction bid.

The auction process reached its peak at Round 11 when the bid price graduated to $275,904,886.25 with all the three bidders still actively participating. The Main Stage of the Auction, however, ended at the conclusion of the 11th Round, with Airtel listing an exit bid of $270,000,000, while MTN posted an exit bid of $273,000,000, giving way to the Assignment Stage. At this point, Airtel had dropped off from the race having posted a lower exit bid, thus leaving Mafab and MTN as winners of the two available lots.

Announcing the results of the Auction exercise, the Executive Vice Chairman of NCC and Auction Overseer, Prof. Umar Garba Danbatta, who recalled the processes and activities leading to the successful conduct of the auction, said the NCC published a public notice on its decision to award two lots of 100 megahertz (MHz) Time Division Duplex (TDD) available in the 3.5 GHz band through an auction process to support the delivery of ubiquitous broadband services for the deployment of 5G network in Nigeria.

The auction held successfully today, Monday December 13, 2021 at the Transcorp Hilton Hotel, Abuja with the three bidders competing for the available two slots. The Commission adopted the Ascending Clock Auction format which ended after Round 11 and proceeded to the Assignment Stage. It is my pleasure to announce that at the end of the auction, Mafab Communications Limited and MTN Communications Nigeria Limited emerged as provisional licence winners.”

Arising from the above, Danbatta said that the winning bid price for the auction is $273,600,000 for each lot of 100 MHz TDD and the provisional winners are expected to pay the Winning Bid price, less the Intention-to-Bid Deposit, by February 24, 2022.

He expressed satisfaction that the auction process was efficient, fair, credible, well-organised and transparent and was designed to deliver the ideal outcome.

The EVC congratulated the winners and thanked the Federal Government for its support and commitment to the deployment of 5G technology in Nigeria, which, he said, will bring substantial network improvements, including higher connection speed, mobility and capacity as well as low-latency capabilities to communications services in Nigeria.

Sequel to the successful auction by the two winners, Danbatta said in line with the processes outlined in the IM, the provisional winners have proceeded to the Assignment Stage.

The EVC thanked all stakeholders, who have contributed to the success of the auction process. He said the huge investment that will accrue from the sales of the spectrum band auctioned will result in increased transformation in life and businesses.

Earlier, at the opening ceremony, the Honourable Minister of Communications and Digital Economy, who doubles as the Chief Host, Prof. Isa Ali Ibrahim (Pantami), who emphasized Federal Government’s commitment to driving digital economy, commended the Commission for its efforts towards implementing the 5G Deployment Plan for the country.

He expressed optimism that the dawn of 5G network in Nigeria will offer significant advantages over current technologies, some of which include much lower latency, higher bandwidth, greater device density, longer battery life for nodes, and greater network flexibility.

Also in his remarks, the Chairman, Board of Commissioners, NCC, Prof. Adeolu Akande, said that spectrum plays a strategic role in meeting the insatiable demand for advanced mobile data services as well as a new wave of wireless broadband such as remote object manipulation, industrial automation, virtual and augmented reality, and next-generation connectivity for vehicles. He said the use cases will continue to increase the impact that mobile services have on societies and economies.

He commended the Minister for his unflinching support, the Board of Commissioners, Management and staff of the NCC for the role they played in making the auction to be successful. He also thanked the bidders for believing in the Nigerian communications sector by their willingness to invest millions of dollars in the sector for the provision of 5G services. He said that the Commission is committed to transparency and openness, which the auction represents.

Prof. Akande’s voice was amplified by the Executive Commissioner Technical Services at NCC, Engr. Ubale Maska, who served as the auction adviser. While delivering the Vote of Thanks, Maska conveyed the gratitude of the Commission to all stakeholders, giving special mention of the Auction Planning Committee, the media and staff of the Commission.