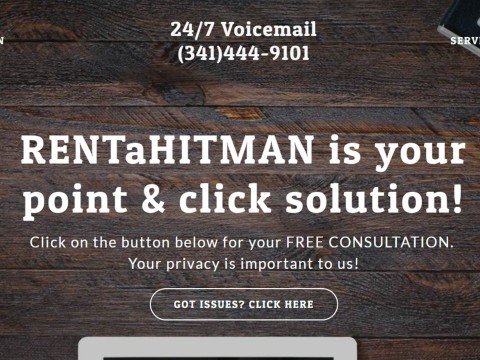 A website, initially set up by graduates to offer IT support, has caught a criminal after a woman used it to try to arrange the murder of her ex-husband.

RentaHitman.com is a darkly titled domain set up by a group of friends after they graduated from a California business school with degrees in IT.

The site’s operator, Novato resident Bob Innes, told SFGATE that ‘hit’ in the site’s title referred to website clicks and that ‘man’ represented the team of IT professionals whose services were available to hire.

Since the domain was registered in 2005 with the tagline, “Your Point & Click Solution!” it has received hundreds of inquiries from users seeking to engage an actual hitman to murder on their behalf.

Innes eventually fully converted the domain into a joke hitman-for-hire site. Despite the inclusion of fake details, such as the statement: “Rest assured that your information will remain private since Rent-A-Hitman is the only organization in the world that is 100% compliant with the Hitman Information Privacy & Protection Act of 1964,” some users still took the site seriously.

One such user was 52-year-old Wendy Lynn Wein of South Rockwood, Michigan. In the spring of 2020, Wein attempted to use the site to solicit the murder of her ex-husband.

Wein filled out a ‘service request’ form on the site using a fake name. Her details were then passed onto the Michigan State Police. When an undercover detective, posing as a professional hitman, contacted Wein, she agreed to meet with them.

Wein then gave the detective her former husband’s place of employment, work schedule and home address and told him that she would pay $5,000 to have him killed.

Later that day, Wein met up with the detective and paid what she believed was a $200 deposit to secure their services as a hitman.

On November 12, Wein pleaded guilty to using a computer to commit a crime and solicitation of murder.

Wein will be sentenced on January 13 2022 by 38th Circuit Court judge Daniel White, who presided over the case. Under her plea agreement, Wein will serve no more than nine years in prison.