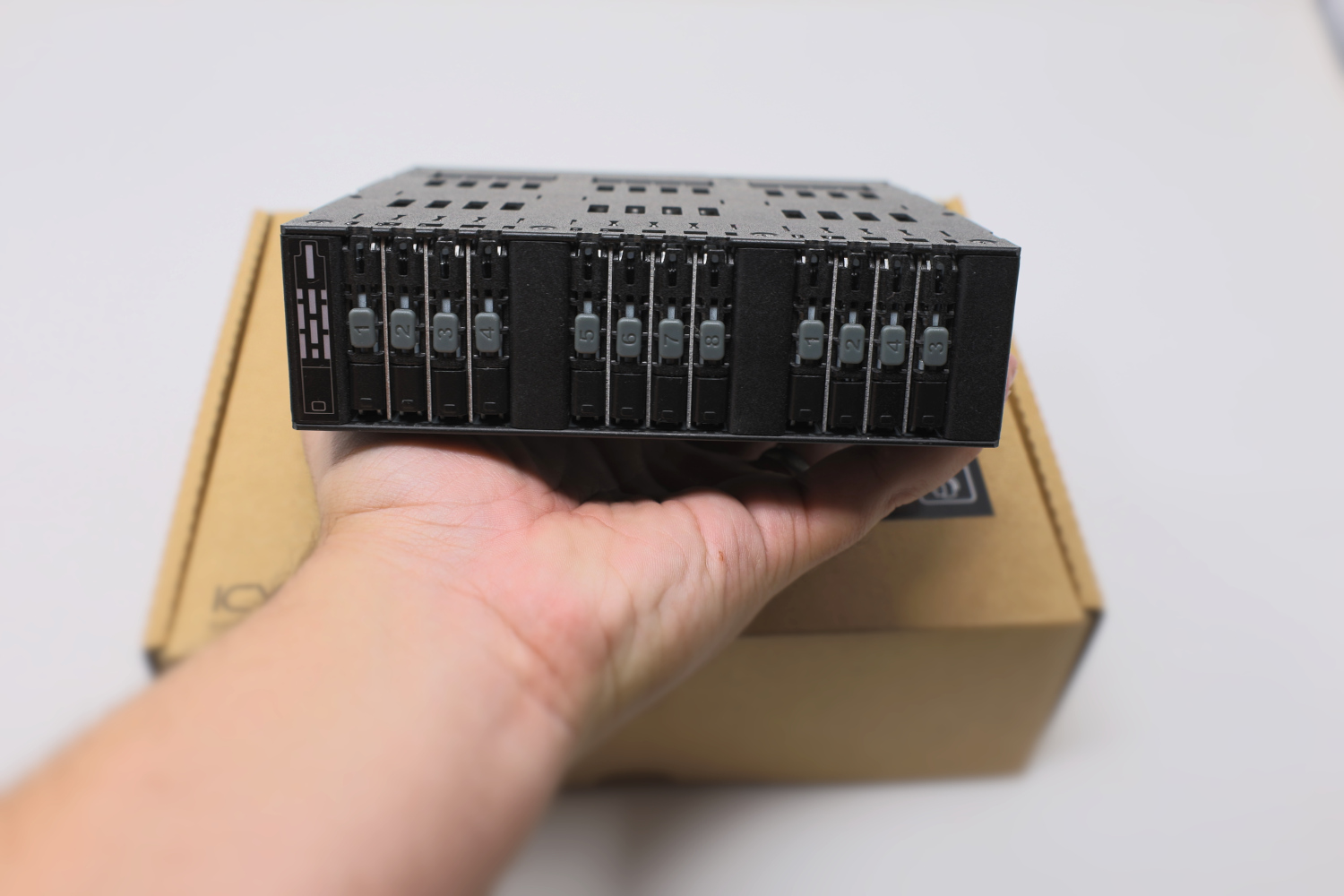 It is made out of metal construction and uses removable M.2 SSD trays that support tool-less drive installation/removal for effortless drive maintenance. In addition, the MB873MP-B is equipped with dual 40x20mm cooling fans in the rear to remove the heat generated by the high-speed PCIe 4.0 SSD for best cooling performance.

Supporting up to 8 PCIe 4.0 NVMe M.2 drives in a single 5.25″ device bay increases the storage efficiency of a system.

The MB873MP-B unlocks the potential of the PCIe 4.0 M.2 NVMe SSDs by using 8x OCulink (SFF-8612) connection dedicated for each drive to allow up to 64Gb/s transfer speeds per drive bay, which is 2x faster than PCIe 3.0 and 10x faster than SATA.

Typically, M.2 SSDs are installed on the motherboard or adapter card that is often secured by tiny screws and requires opening the computer case to access the drives. With the MB873MP-B’s removable drive design, M.2 NVMe SSDs are brought to the 5.25″ optical bay of the computer system and lets you change the drives without opening up the case or using a tool, making drive maintenance an efficient process.

The ToughArmor MB873MP-B is equipped with a patent-pending M.2 adjustable locker for tool-less drive installation/removal. Insert the M.2 NVMe SSD (2230, 2242, 2260, 2280, and 22110), move the adjustable M.2 locker until it firmly secures the SSD and closes the lid. The whole process takes less than 10s to complete.

Powering up the 8 M.2 NVMe SSDs at once can accumulate heat. Therefore, the company have included dual 40x20mm cooling fans, providing an amount of airflow throughout the entire enclosure to keep the M.2 NVMe SSD at optimal operating temperatures, even under heavy load.

The specialized slimline drive tray is made with thick aluminum and acts as a heatsink to dissipate heat generated by M.2 NVMe SSDs.

The included thermal pad fill the gaps between the contact surfaces and transfers heat away from the M.2 SSD to the heatsink tray, allowing airflow to dissipate the heat away efficiently.

Ensuring the enclosure can be relied upon for many years, the ToughArmor MB873MP-B can hold up in the harshest environment. It comes equipped with rugged full-metal protection throughout the entire device and tray, making it perfect for industrial devices that may require a flammability rating. The MB873MP-B is suitable for various enterprise systems, including the medical, military, law enforcement industries, and manufacturing conditions such as embedded control and factory automation systems.

Grounding your M.2 NVMe SSD is essential as swapping drives without proper grounding may lead to hardware damages due to static shocks. With firm’s EMI Grounding Technology, once the M.2 locker clips into the SSD screw hole, the SSD will be in a grounded state throughout the enclosure’s tray and housing. After the enclosure is installed in the system with 4 screws on its’ side, it will ground itself throughout the computer system.

The LED status light in each of the trays gives you the drive status information with a glance. With Active Power Technology, the enclosure turns on when the drive is inserted and automatically shuts off when all drives are removed.

Never forget which drives belong in which bays. With drive ID plugs, you’ll always know which drive tray belongs in your RAID or which drives contains specific files. Rearrange them to suit your configurations better, or remove them for a simplified look.

The ToughArmor MB873MP-B supports 15-pin SATA power cables with locking latches. As a result, you’ll never need to worry about cables unintentionally disconnecting from your enclosure. Once the cables are connected, they will lock and stay in place securely.