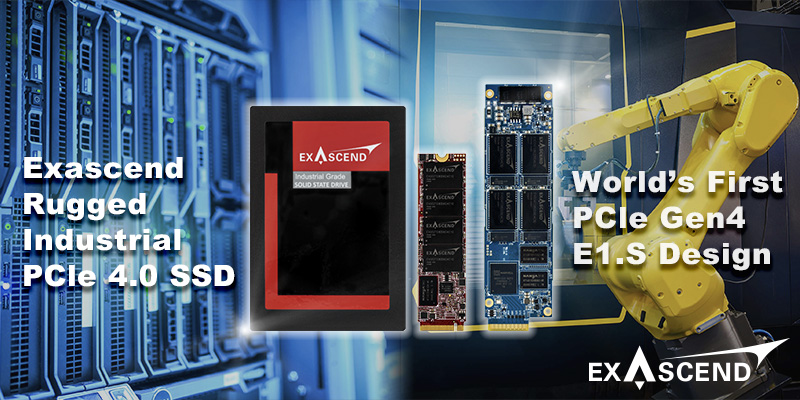 Higher transfer speeds at lower power draw
The PI4 series is paired with Marvell Technology, Inc.‘s 12nm controller and the latest industrial-grade 3D TLC NAND flash for performance and low power consumption, delivering sustained transfer speeds of up to 3,500MB/s and 4K random speeds of up to 600,000 IO/s. In addition, it offers energy savings when compared to its predecessors, improving write performance per watt by a 143% – marking the company‘s most recent effort to reduce customers’ carbon footprint through low power PCIe storage.

Engineered to withstand harsh industrial conditions on the edge
The PI4 series is designed to address performance-hampering factors commonly found in edge applications, including small space, overheating, extreme temperatures, mechanical stress and unstable power supply. The SSDs can operate in temperatures from -40°F to +185°F (-40°C to +85°C). They are certified to withstand mechanical stress and vibrations, featuring the company‘s proprietary Adaptive Thermal Control (ATC) firmware technology for stable top-level performance without thermal-throttling-induced drops and spikes.

Configurations and availability
Product samples for the PI4 series are available for customers upon request. The series is available in both standard and pSLC configurations with storage capacities from 960GB to 7,680GB and endurance ratings up to 24,000TBW, based on JESD219 Enterprise Workload.

The PI4 series comes in M.2 2280 and U.2 form factors for broad system compatibility; a DRAM-less M.2 2230 option for compact systems; and a rugged E1.S design – combining performance, capacity and hardware power loss protection in a thermally-efficient next-gen design. Catering to different thermal environments, E1.S SSDs can be configured with heat spreaders, asymmetric and symmetric enclosures.

All models are covered by 3-year limited warranty.