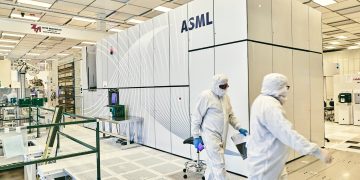 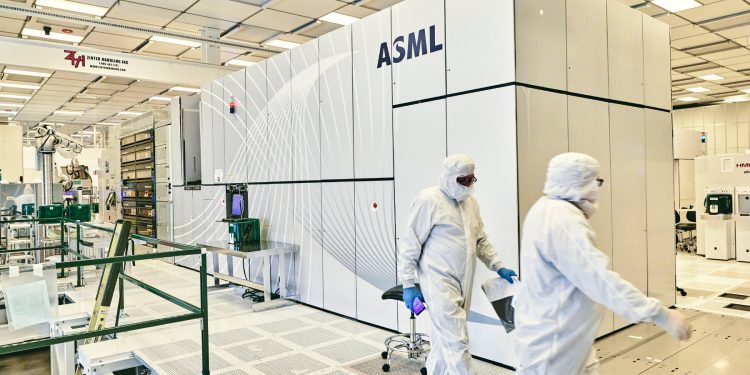 AMSTERDAM (Reuters) -Shares in ASML Holding, a key supplier of equipment to semiconductor makers, fell on Tuesday following a Bloomberg News report that the U.S. government wants to restrict the company from selling equipment to China.

ASML has already been unable to ship its most advanced tools to China, but the report said Washington would also restrict the sale of slightly older machines, citing “people familiar with the matter.”

A spokesperson for ASML said the company was unaware of any policy change.

“The discussion is not new,” the spokesperson said. “No decisions have been made, and we do not want to speculate or comment on rumours.”

China is ASML’s third largest market, after Taiwan and South Korea, representing around 16% of 2021 sales, or 2.1 billion euros.

ASML has a near monopoly on the manufacture of lithography systems, machines vital for chipmakers such as Intel, TSMC and Samsung. Lithography systems cost hundreds of millions of dollars apiece and use focused beams of light to create the circuitry of computer chips.

Lithography and other semiconductor manufacturing equipment require an export license, as computer chips are considered “dual use” technology, with military as well as commercial applications.

Since 2019, the Dutch government, in agreement with the U.S., has not granted a license for ASML to sell its most advanced machines, which use “extreme ultraviolet,” or EUV, light waves, to Chinese chipmakers.

The majority of chips worldwide are manufactured with DUV lithography. Restricting their sale to China would be highly damaging for China’s chip industry and would likely worsen a global semiconductor shortage.

In 2021, the U.S. National Security Commission on Artificial Intelligence — led by former Google CEO Eric Schmidt — recommended that the U.S. Departments of State and Commerce should push allies to deny China access to top DUV, EUV and related tools.

In a reaction, analysts from Citi said they viewed a total ban on DUV equipment as “highly unlikely” but further restrictions for equipment makers could be tied to China foreign policy “escalations with Russia or incursions into Taiwan.”