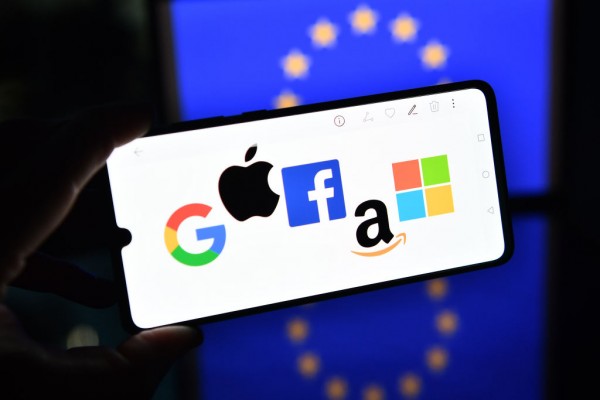 Apple and Google faced a hefty fine of $11 million (10 million euros) after the Italian authorities discovered that they were abusing user data without their consent. The tech giants have violated the Consumer Code in the country as a result.

An illustration picture taken in London on December 18, 2020 shows the logos of Google, Apple, Facebook, Amazon and Microsoft displayed on a mobile phone with an EU flag displayed in the background.

According to a report by NDTV, the US-based tech companies received $11 million fine after Italy’s antitrust watchdog found out that they violated the consumer regulation, which tackles using the user data for commercial purposes.

On Friday, Nov. 26, Italy said that the tech giants have been exploiting consumers’ privacy by collecting their data without their consent. The authorities that these firms have been using them for promotional activities.

In a press release, the regulatory board said that Apple has been taking advantage of user data’s “economic value” as it increases its product sales through App Store, iTunes Store, and other commercial platforms.

The Italian authorities further explained that Apple and Google did not clarify that the user data would be used commercially. No information is provided to the user before their data comes out.

In short, the Cupertino giant does not remind the users regarding the purpose of data collection. Instead, the iPhone maker would only say that it will utilize the data to improve the user’s experience, setting aside the commercial purpose.

Apple Does Not Inform its Users About Their Data

In another report by Macrumors, if you stumble on the Apple App Store, you can see a screen that will show you more about the user data regardless of whether it will be used to personalize the user’s experience or secure the company’s services.

Italian authorities highlighted that Apple failed to acknowledge that their data would be directed to commercial undertaking.

Apple has been committed to improving users’ data amid data leakage and data theft over the past years. The Cupertino firm said it would continue to tighten its privacy regulation to prevent fraud and meet its objectives.

In addition, Apple’s privacy policy wrote that the company could only use the data given that the user grants his/her consent to the company. This is made to clarify any confusion concerning data sharing on the consumer’s part.

Earlier this week, Italy’s antitrust watchdog has hit Apple over its alleged unfair practices in competition with Amazon and Beats. The authorities probed that both Apple and Amazon have been restricting Beats product sales using third-party resellers, thus making it an anti-competitive action.

Later, the Cupertino giant paid a fine exceeding $150 million as a result.

Amid the pandemic outbreak last year, the French consumer watchdog hit Apple with a $27 million fine over its deceptive marketing practice. At that time, the company fooled its customers about slowing down its old iPhones.