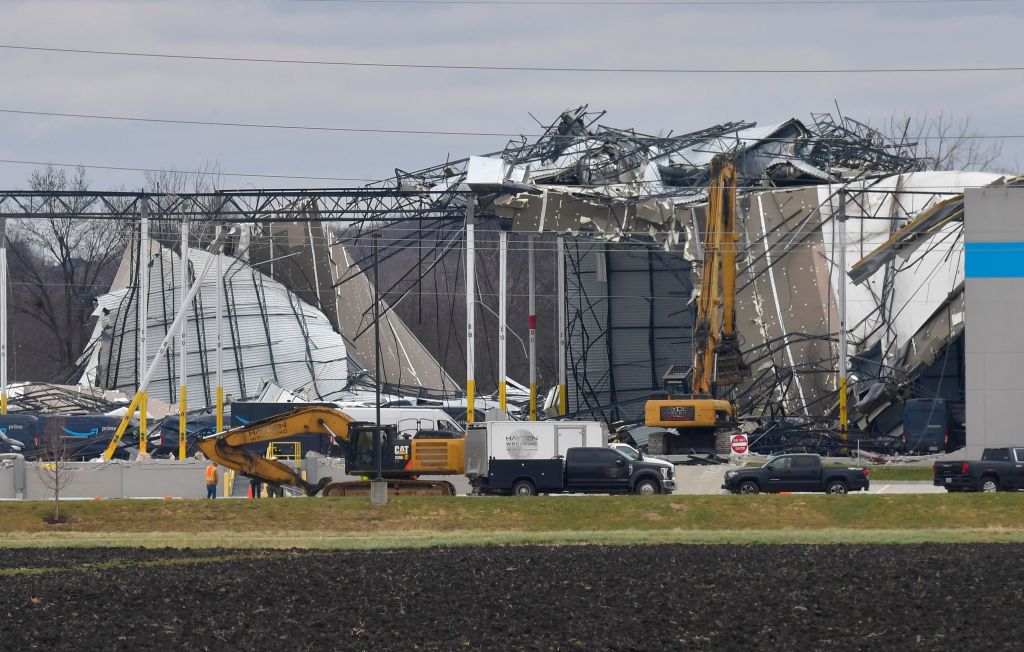 Workers remove debris from an Amazon Fulfillment Center in Edwardsville, Illinois, on December 11, 2021, after it was hit by a tornado. - Tornadoes ripped through five US states overnight, leaving more than 70 people dead Saturday in Kentucky and causing multiple fatalities at an Amazon warehouse in Illinois that suffered "catastrophic damage" with around 100 people trapped inside. The western Kentucky town of Mayfield was "ground zero" of the storm -- a scene of "massive devastation," one official said.

An Amazon warehouse in St. Louis, Edwardsville, Illinois, had collapsed on Dec. 10, resulting in the death of six Amazon employees.

Officials stated that other employees were injured after the warehouse roof near Edwardsville, Illinois, collapsed. It is believed that a tornado was the reason behind this unfortunate event.

During a news conference, the first responders stated that the search and recovery efforts will take at least three more days and that they do not expect to find more survivors, according to ABC News.

The National Weather Service or the NWS said that the damage indicates that the tornado that had hit the facility was an E-F-3. Currently, there are 22 reported tornadoes through the South and Midwest that hit the area in one day, according to CNN.

Unfortunately, it is not yet clear how many people were inquired, but first responders said that one employee was flown via helicopter to a nearby hospital. The rescue crews are going through the rubble to know if anyone is still trapped inside.

Illinois’ Recovery After the Tornado

Gov. J.B Pritzker did a press conference to talk to the residents of Edwardsville, Illinois. He said that he had already talked to President Joe Biden and Amazon about giving assistance to the people affected by the tornado.

Gov. Pritzker sent out his thoughts and prayers to the victims and their families. He also thanked all of the first responders for all of their work. The governor assured the public that they support the employees and their partners in the affected areas.

Meanwhile, Amazon’s founder Jeff Bezos posted his sentiments on Twitter on Dec. 12 and said that he is heartbroken over the loss of their teammates.

According to Amazon, sites are alerted if a tornado is about to hit the area. All employees are immediately notified, and they are directed to move to a shelter in a safe location.

All new Amazon employees are given emergency response training, and this training is constantly reinforced all year round.

The e-commerce has two sites in the area that is now closed. The building that was impacted by the tornado is Amazon’s delivery station in Illinois, according to NBC News.

The building opened in July 2020 and the facility is 1.1 million square feet, and it employs 190 employees across different shifts.

The Amazon workers union had issued a statement following the incident. The union said that time and time again, the company puts its business over the lives of its employees.

Requiring the employees to work through a tornado warning is inexcusable. The union also pointed out that the employees who passed away won’t be going home to their families, and others are still trapped beneath the rubble of the facility.

The union added that this is another example of Amazon putting profits over the health and safety of the employees and that they want to correct this.

The union does not want Amazon to be let off the hook to put people’s lives at risk. According to Stuart Appelbaum, the President of the Retail and Wholesale Union, the union wants the company to be held accountable for the incident.