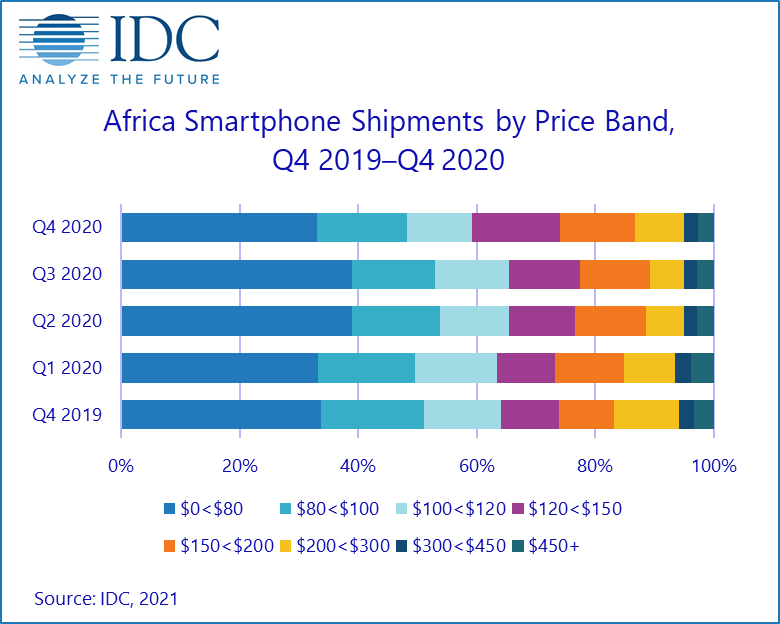 In a statement released to the media, the IDC said while the region displayed signs of recovery in H1 2021, its newly released Quarterly Mobile Phone Tracker shows that component shortages began to negatively impact African markets in Q3 2021, causing a decline in smartphone shipments.

Market research showed that Africa’s top three smartphone markets recorded mixed performances in Q3 2021. Egypt saw shipments decline 19.5% QoQ, while Nigeria was down 9.4% over the same period. Both of these markets are dominated by Chinese brands that had lower shipments due to component shortages.

South Africa, on the other hand, saw shipments increase 28.4% QoQ growth, with Nokia performing well with its competitive C-series models and Samsung having a strong quarter in preparation for the festive season.

Transsion brands (Tecno, Itel, and Infinix) led the African smartphone market in Q3 2021 with a unit share of 47.4%, maintaining stable shipments into the region. Samsung placed second with 21.3% share, while Xiaomi – which experienced a QoQ decline in shipments – placed third with 6.1% share.

“The 5G market is still below its full potential in Africa due to poor telecommunications infrastructure,” said George Mbuthia, a research analyst at IDC. “4G will remain dominant as telcos are keen on recouping the huge investments they made in 4G infrastructure that is yet to be fully utilised. The relatively high cost of 5G devices is another inhibitor. In the longer term, however, prices will start declining as more vendors launch affordable 5G models.”

Looking ahead, IDC expects smartphone shipments into Africa to grow 7.6% QoQ in Q4 2021. “The market will perform better in the final quarter of the year as channels will look to secure shipment allocations to manage supply shortages and capitalise on the high demand for smartphones driven by December festivities and Black Friday promotions,” said Ramazan Yavuz, a senior research manager at IDC. “A more stable recovery in the supply chain is expected starting from the second half of 2022 when component shortages will start to ease. After this period, the transition from feature phones to smartphones will accelerate as there is clear demand for smartphones in the African market.”